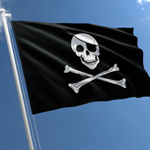 Shiver me timbers! Ever wondered why pirate buccaneers actually went from dangerous thieves to making millions at a cinema near you? How society stopped viewing them as wicked, plundering oceanic pests and started embracing pirate-themed parties and Halloween costumes? What’s our fascination with pirates, really? And why do we love them so much?

The History of Pirates

For several generations now, Captain Hook has probably been most people’s first close encounter with a literary pirate. With his ticking crocodile nemesis in hot pursuit, we were introduced (probably booing enthusiastically) to his life of crime aboard the Jolly Roger. Now, no trick-or-treating event is complete without a skull and crossbones, or at least one child with a one-eyed jack pirate flag. Quite simply, Pirates have never been cooler…

It’s commonly thought that the popularisation of these rum-guzzling troublemakers began in the eighteenth century when a Captain Johnson published his General History of the Robberies and Murders of the Most Notorious Pyrates. A book about the most famous nautical ne’er-do-wells of the age, it was the first time pirates hadn’t been portrayed as ‘all bad’. They hadn’t been protagonists as we know them today, either, but Johnson’s book was a hit and the seeds of curiosity had been sown amongst the public.

Before Skull and Crossbones bunting would start to appear in children’s parties and well before ‘Talk like a Pirate Day’ would become a worldwide event (on social media, at least), Robert Louis Stevenson had a big role to play. When he appeared in Treasure Island, Long John Silver’s character did have some slightly redeeming qualities – making him even seem a little similar in some ways to our good old protagonist Jim Hawkins. Sharp, adaptable, and well-spoken, whether or not you liked him, he was a far cry from Blackbeard. To blur the black and white boundaries of bad and good even further, he even had a wife! Back then, it would still have been wildly strange to imagine wanting to be a pirate. Now, it’s likely something most of us have wondered about. After all, there’s something alluring about being able to sail the high seas, going wherever fancy takes you and bringing back a haul of treasure at the end of it, to boot. It’s why we can all relate, deep down, when Captain Jack Sparrow of ‘Pirates of the Caribbean’ fame describes his ship: “What the Black Pearl is, is Freedom”.

Unsurprisingly, pirates today tend mostly to be confined to the big screens and fancy dress costumes. And in a big way, too! Johnny Depp, in particular, has captured many kids imaginations—and many box office millions—as Jack Sparrow, the adventure-loving scoundrel and captain of the Black Pearl. These greedy, plundering looters have even been the focal theme of Disneyland’s ever-popular dark ride attraction, Pirates of the Caribbean, since as far back as 1967. They continue to be all around us in theatres, literature, and even advertising. Nobody’s scared off by an invitation to a pirate-themed party any more, or struck with fear by skull with bandana pirate bunting—they’re more likely to think of ‘Do whatever you want’, and all the ensuing laughs when it comes to pirates!

Pirate parties are here to stay, and we’re now a lot more focused on the ‘Jolly’ than the ‘Roger.’ Kids and adults alike both love getting into the swashbuckling theme and it’s even easy to find pirates or treasure as the topic of tours and museums across the UK. Those of us wanting to join in the fun can easily promise adventure and hilarity with Christmas Pirate Flags!

How to host a pirate-themed party

Wondering how to dress up for a party, or looking to turn your home into a buccaneering party venue? Don’t forget the skull and crossbones flags—or youmay be forced to walk the plank. Eye-patches, cutlasses, and peg-legs are easily made from handkerchiefs, old clothes, and household items, as we all may know from our younger days. A large T-shirt can even make an instant costume for a lowly pirate sailor who swabs the decks, though a corsair of higher rank may need something more terrifying.

For the little ones (or those of us who refuse to grow up), a treasure hunt never goes amiss. Your guests will love the enticing appeal of following a map around the house or garden, and the mood is easily set both indoors and outdoors with crossed sabres or Jack Rackham pirate bunting. Now that autumn’s over, it’s not even unusual to see Christmas Pirate bunting. What about a Long John Silver-style stuffed soft toy parrot for the kids? Some spare rope to make some rigging? The possibilities are endless, and pirates are cooler than ever—just don’t forget the rum for the grown-ups. Yo ho ho!