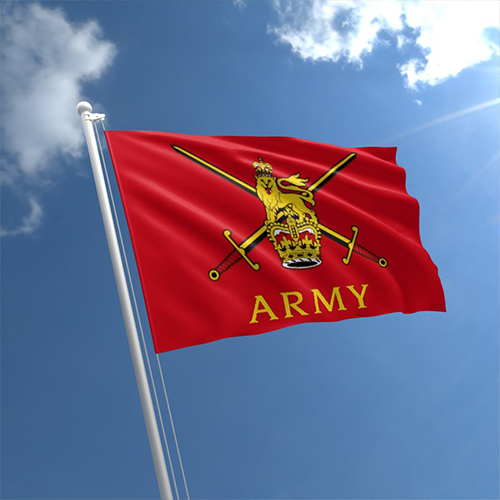 Across the world there are lots of fascinating military flags used by branches of the army, as well as naval ensigns used by nautical forces, such as the navy. Flags and signs have been used as far back as the Bronze Age for warfare and became common especially during the medieval period. While the use of military flags in war is no so common nowadays, branches of the armed forces still enjoy flying their own ensigns around the barracks and at special events. In particular, they are popular on Armed Forces Day as a way of showing your support for soldiers. So, let’s have a look at some of the modern military designs and traditional flags used in the UK, as well as from around the world in the US and Australia. There is so many British Military flags that are worth attention. But, let’s start with the British Army. The British Army flag definitely stands out from the crowd, with a royal crimson field and the Royal Crest in the middle and St Edward’s Crown. There is also Army written beneath the symbol in gold. This flag was adopted in 1999 and it is used at military events. We can also see the Royal Air Force's flag is completely different. The field is air force blue and it features the Union flag in the canton, as well as the RAF roundel. While the RAF was created in 1918, this flag was designed in 1921 and you will find that many air forces around the world take inspiration from this flag. Of course, this is the perfect flag to fly for the centenary of the RAF, which is known as RAF100. This makes the 100 years since the RAF was created and it is celebrated on the 1st April 2018. What a great way to reflect on its history by flying this flag!

Another famous British military flag includes the Royal Navy flag. This white ensign features the St George’s Cross, with the Union flag in the canton. This is used by Royal Navy ships and you will also see similar versions of this, known as the Blue Ensign and Red Ensign, which can be used by different people.

So, let’s compare some of these modern designs with some historical British military flags. For example, the White Ensign was used between 1630 and 1702 and we can see that it is different to the one that is used today on British Royal Navy Ships, with its white field and it has a smaller St George’s Cross in the canton. Another White Ensign that was used between 1702 and 1707 features a large St George’s Cross and the in the canton there is a smaller St George’s Cross. While these historical flags are not in use anymore, they can still be fun and interesting to fly at special events and parades to celebrate the military through the years. Of course, also check out the First World War WWI Centenary 5ft x 3ft Flag. This is a special flag that we have to remember the Centenary of World War One and all of the soldiers who gave their lives for their country. The flag features the Union flag in the background with the shadow of the solider in the middle and a red poppy. There is also writing to commemorate the 100 years of the First World War with the dates 2014 – 2018. We have a range of US Military flags that you can check out for any occasion. This includes some historic designs, such as the Confederate Flag. This battle flag of General Lee and the Army of Northern Virginia became a symbol of the South and the Confederates in 1861-1865 and you can still see it flying in some parts of the US to this day, although it is controversial. Nowadays, you are more likely to see the US Army Flag. This has a white field with a blue War Office Seal, with a red scroll with the writing ‘United States Army’. Underneath it states 1775, which was the year that the army we see today was created. There is also the US Air Force Flag, which was first adopted in 1951. This has a blue background, with the US Air Force seal in the centre and it has 13 white stars around it to represent the 13 original colonies of the US. We also have a bunch of Australian Military flags that have interesting backgrounds and links with the UK. For example,  The Royal Australian Air Force Ensign uses the Australian national flag, which of course features the Union flag, but the field has been adapted to feature the Air Force blue. In addition, the RAAF roundel is featured in the lower fly quarter of the flag, which has a leaping kangaroo within dark blue and white rings. Before this flag, the RAAF used to use the same British ensign of the RAF, but this later changed to this design to avoid any confusion. In addition, the Australian Navy Ensign used to be the same as the British White Ensign, but started to use the new design from 1967. Again, it uses the design of the national flag of Australia with the Union flag, but instead of the blue background, it features a white background with a blue Commonwealth Star and Southern Cross.