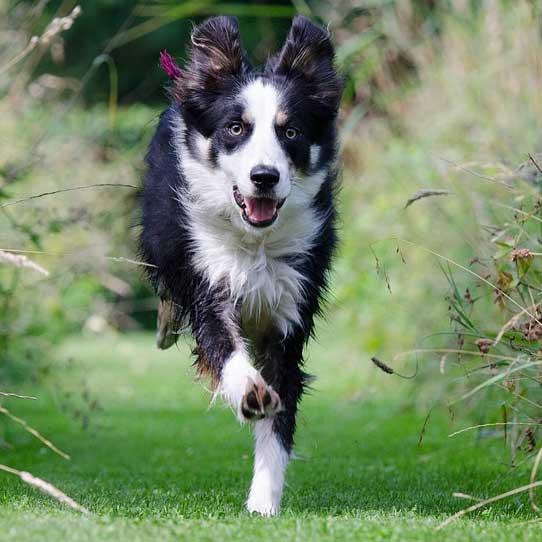 Over the past couple of years we have received an increasing number of requests from Flyball teams for custom made Flyball flags for their clubs and events. As the sport seems to be increasing in popularity we decided to delve deeper into this exciting spectacle to see what all the fuss is about.....

Flyball started as a dog sport in the late 1960s and early 1970s in Southern California. Dog trainers combined scent hurdle racing – dogs go over four jumps and pick up four scented articles - with the dogs bringing back a tennis ball to the finish line.

A tennis ball launching machine was added and the first flyball box was born!!  Herbert Wagner was credited with making the first real flyball box, demonstrating it on the Johnny Carson Tonight Show.

The first Flyball tournament was held in the USA IN 1983.

Flyball has been taken up in many countries including Canada, Australia and South Africa, Belgium, Czech Republic, Finland, Germany, Poland, the Netherlands, Hungary, France and the UK. All have National flyball tournaments.

WHAT IS FLYBALL ALL ABOUT?

Flyball is a dog sport where teams of dogs race against each other from a start/finish line, over a line of hurdles to a box that releases a tennis ball to be caught when the dog presses the spring-loaded pad. The dogs then returns to their handlers while carrying the ball.

The hurdle height is determined by the shoulder height of the smallest dog in the team. Under current North American Flyball Association (NAFA) rules this should be 5 inches (12.7 cm) below the withers height of the smallest dog, to a height of no less than 7 inches (20.3 cm) and no greater than 14 inches (40.6 cm). Current EFC (European Flyball Championship) rules limits the height to no less than 17.5 cm and no greater than 35 cm.

Each dog must return its ball fully across the start line before the next dog crosses. Ideal running is nose-to-nose at the start line. The first team to have all four dogs cross the finish line wins the heat. Penalties are applied to teams if the ball is dropped or if the next relay dog is released early.

NATURE OF THE SPORT

A large part of Flyball’s popularity is the fact competitions are available to mixed-breed dogs, allowing rescue dogs and non-pedigree dogs to compete against pure bred dogs. Many champion teams have mongrels in them.

Flyball is not limited to the size of the dog, as smaller dogs such as Patterdale Terriers, Jack Russell terriers and even miniature poodles often compete in mixed breed teams. Smaller dogs are often prized as the hurdle height is based on the height of the smallest dog in the team. One limitation, however, is the fact smaller dogs often have to jump fully onto the Flyball box to trigger the release pad.

As the sport has developed and knowledge within the sport has increased, specific training has been developed. One such development is the use of ‘swimmers’ turns on the Flyball box.