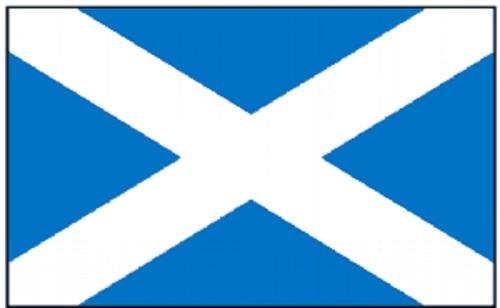 DON'T FORGET TO FLY THE FLAG FOR BURNS NIGHT ON 25TH JANUARY!!

Burns Night is celebrated annually in Scotland on or around the 25th January. It commemorates and celebrates the life of the poet Robert Burns who was born on 25th January 1759 and his contribution to Scottish culture.

Many people and organizations hold a Burns' supper on or around Burns' Night. These may be informal or formal. Formal events include toasts and readings of pieces written by Robert Burns. A Burns' Night supper centers on the entrance of the haggis on a large platter to the sound of a piper playing bagpipes. When the haggis is on the table, the host reads the "Address to a Haggis". This is an ode that Robert Burns wrote to the Scottish dish. At the end of the reading, the haggis is ceremonially sliced into two pieces and the meal begins. Burns' Night is an observance but it is not a bank holiday in the United Kingdom.

Robert Burns was born in Alloway, Scotland, on January 25, 1759. He died in Dumfries, Scotland, on July 21, 1796. He was a bard (poet) and wrote many poems, lyrics and other pieces that addressed political and civil issues. Perhaps his best known work is "Auld Lang Syne", which is sung at New Years Eve celebrations in Scotland, parts of the United Kingdom, and other places around the world. Burns is one of Scotland's important cultural icons and is well known among Scottish expats or descendants around the world. He is also known as: "Rabbie Burns"; the "Bard of Ayrshire"; "Scotland's favorite son"; and in Scotland "The Bard". The Scottish flag is often displayed at Burns' Night celebrations.

At Burns' Night events, many men wear kilts and women may wear shawls, skirts or dresses made from their family tartan.  Many types of food are associated with Burns' Night. These include: cock-a-leekie soup (chicken and leek soup); haggis; neeps (mashed turnips or swedes) and tatties (mashed potatoes); cranachan (whipped cream mixed with raspberries and served with sweet oat wafers); and bannocks (a kind of bread cooked on a griddle). Whisky is the traditional drink. Fly the flag for Scotland and enjoy the celebrations  - visit www.theflagshop.co.uk for all your flags, bunting, hand wavers and car flags OR call 01246 297600 to place an order.